“Wonders of Creation” is the third piece in my collection, Dot by Dot (first piece, second piece). It is an adaptation of the 13th-century cosmographical book, known as Aja’ib al-Makhluqat (Wonders of Creation and Oddities of Existing Things) by Zakariya al-Qazwini.

Qazwini’s book deals with the spheres of the heavens with its inhabitants, astronomical knowledge of that time, and the terrestrial (the four elements, the seven climes, seas and rivers, a sort of bestiary on the animal kingdom, the plants, and minerals). 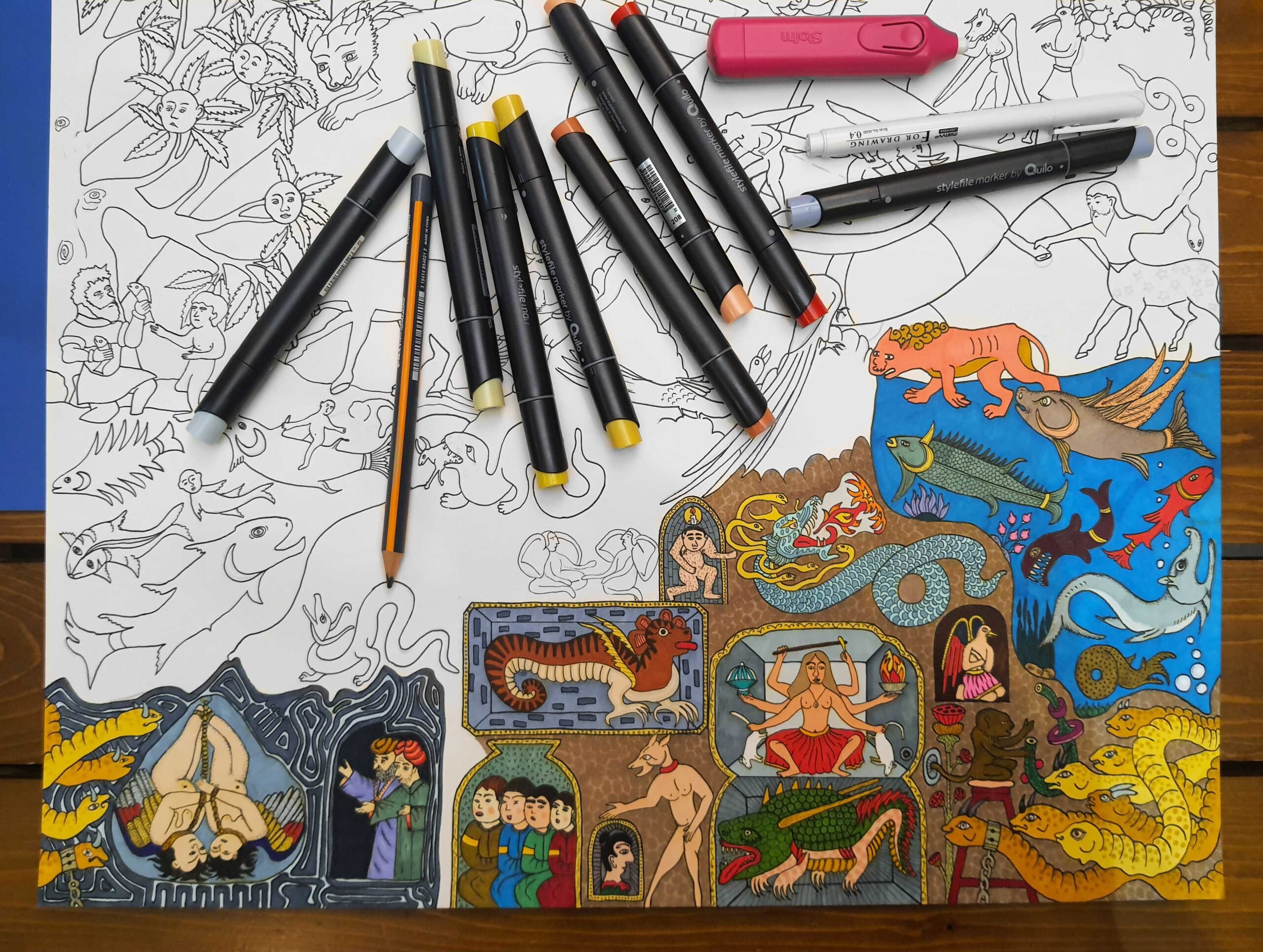 The painting uses some of the illustrations from various copies of the book in different libraries around the world as well as the artist’s own imaginary creatures and supernatural objects. It’s a hand-painted piece, on 50×70 cm paper using markers and ink from the collection DOTxDOT.

As a creator with a background in literature & translation, works of fiction are my primary sources of inspiration. In this particular collection, I try to translate novels I love into the realm of images. Painting these images is a way for me to own the fictional worlds I cherish. So after re-reading a given book, I make a list of images that resonate with me and are essential to the construction of the narrative. Then I begin illustrating every single item in my notebook. In this book, the process was slightly different due to the nature of the book. In order to preserve the medieval nature of the work, I mimicked some of the already available illustrations of the book. Namely from Bordeaux, London, and Qatar Edition of the book. 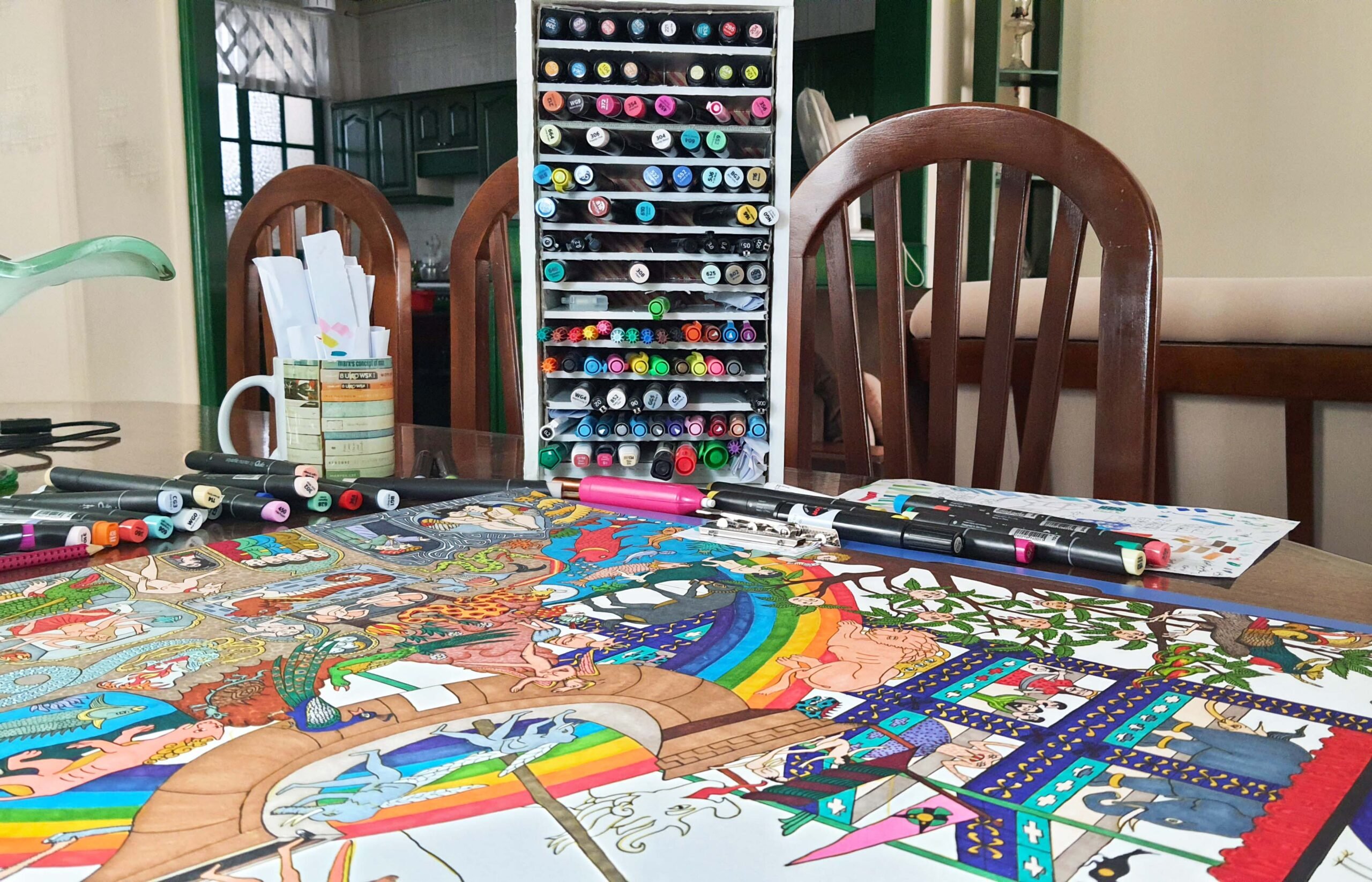 Painting this particular piece had several challenges, among which was the representation of the gold mine, located on the hill on the right side of the painting. From the very beginning, I fancied using actual gold to recreate the mine. Having no experience working with gold leaves, I had to watch many tutorials to master the technique. The end result, however, was very satisfying. The following picture shows the mine. 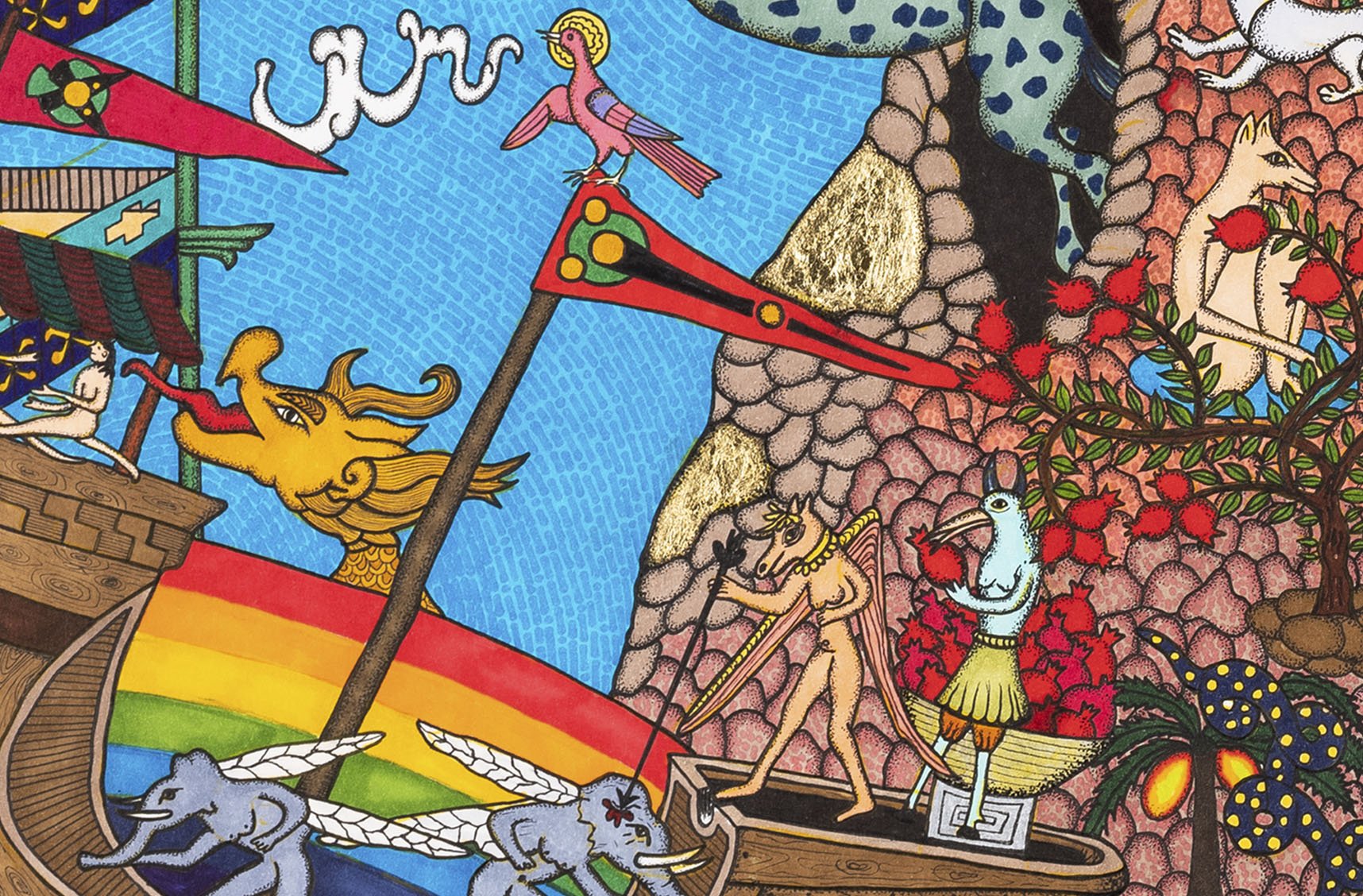 After the process of painting is done, I take the painting to my friend’s studio to get it photographed. I tweak the picture digitally (only if necessary) and mint it as an NFT or Ethereum blockchain. 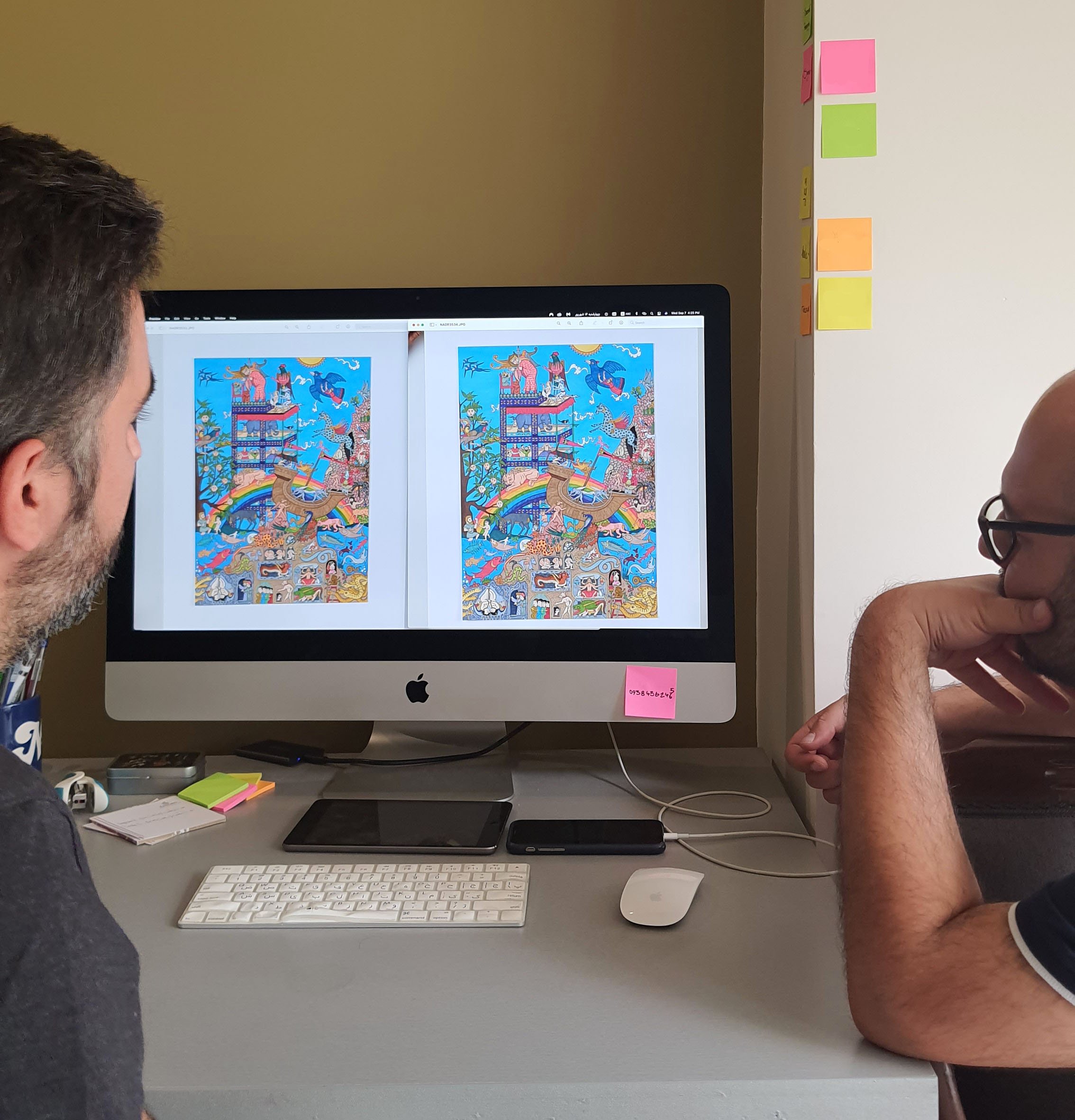 Excerpts from the Book 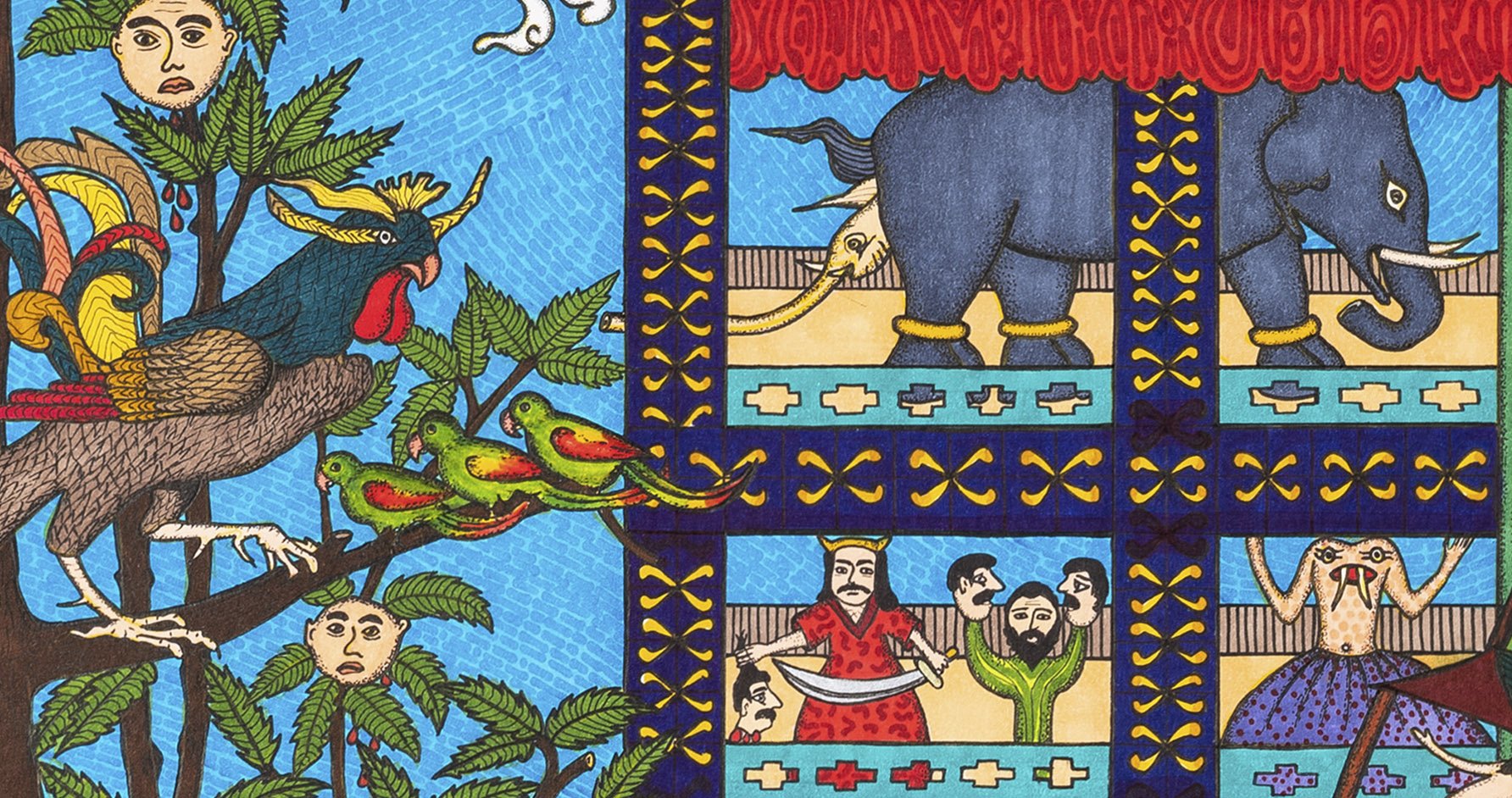 “It is the biggest and the most powerful bird. It is able to grab an elephant or a buffalo as easily as a kite seizes a rat. In ancient times it used to live among people until it kidnapped an illustrious bridegroom, so God sent one of His prophets who confined it to an island of the Ocean where no people lived but only animals like elephants, rhinoceroses, buffaloes, tigers, lions and birds of prey. The Anqa, however, does not hunt them because it must be obedient [to God], and chases only elephants and big fishes. When it flies, its feathers make the sound of a terrible gale, like the sound of a stormy wind through the leaves of a tree. Some merchants said that once their ship was wrecked and they found themselves in great danger on the sea, but the Anqa came and rescued them all. It is said too that this bird lives for one thousand seven hundred years and couples when it is five hundred years old. When it is the time to lay an egg, the female suffers much pain, so the male brings some salt water in its beak and helps her to lay the egg [giving her the water to drink]. It is the male that hatches [the egg] while the female goes hunting. The egg opens after one hundred and twenty-five years: if a female is born, the male arranges a fire and the mother sacrifices herself, letting the chick become its partner; if a male is born, the same thing happens to the adult male, which immolates itself.’

I myself have a bird companion who gives me tremendous joy and [trouble sometimes] as I paint. Her name as Ataback and she is a great poser 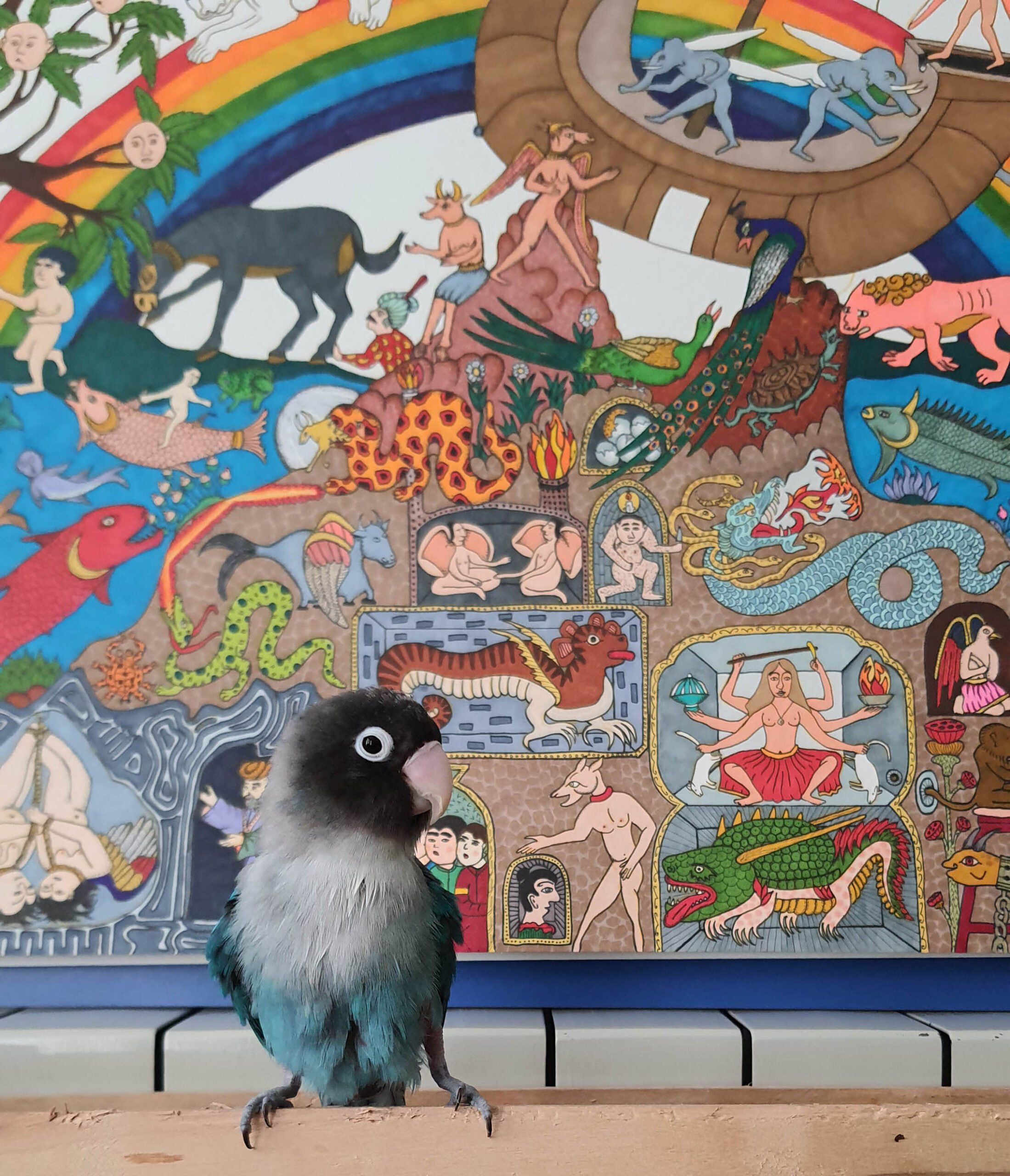 Despite my painstakingly slow process, painting this piece was pure joy. It was like a long journey to a land of wonders and odd creatures. Now every time I look at it on the wall, I am reminded of the pleasant journey and the illusionary world of medieval men and women —and appreciate the way science has saved us from all the darkness of the ancient times. 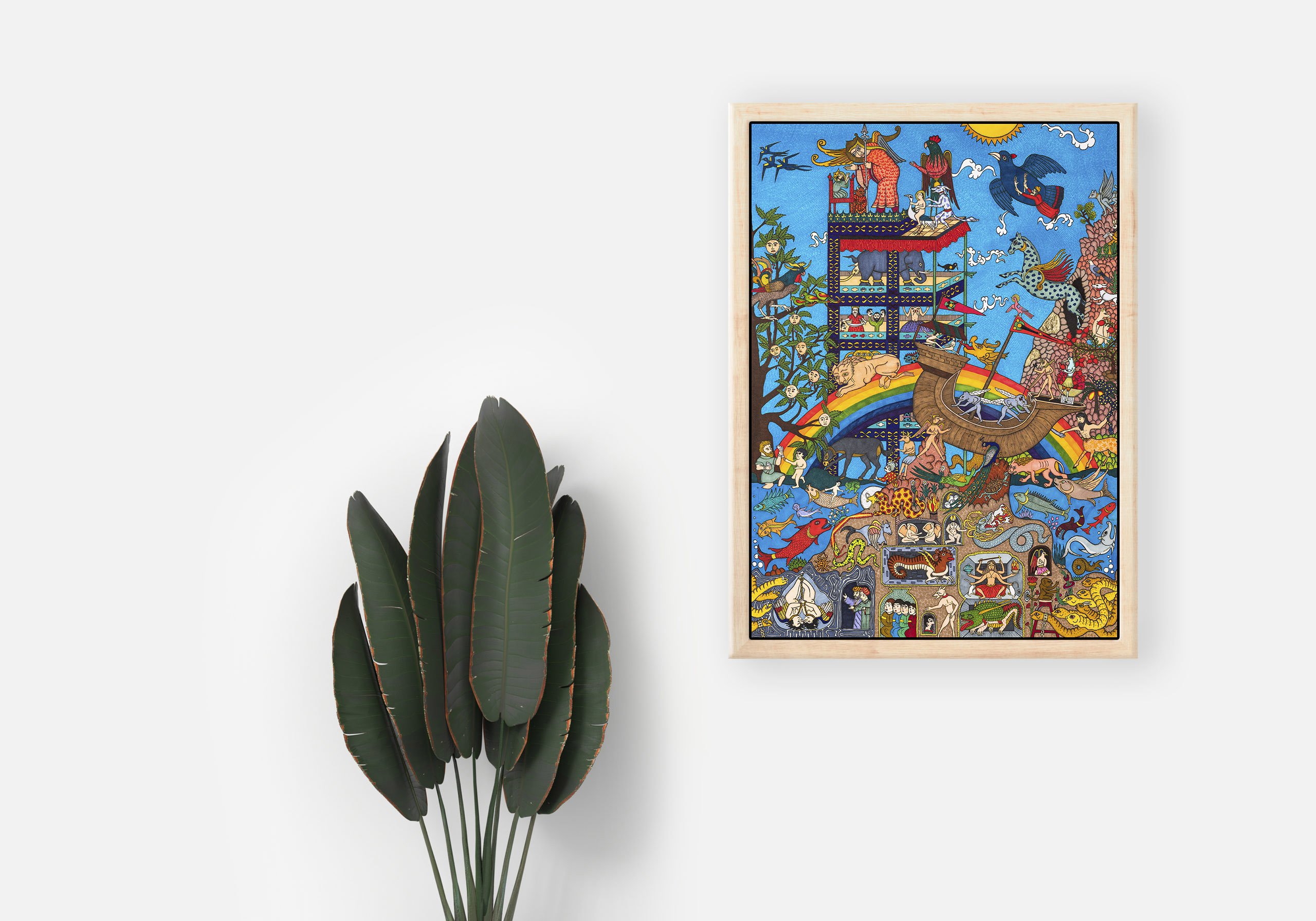 The Liberated People
The Roaming Yellow